Engineering for Change
September 15 is celebrated every year in the country since 1967 as “Engineers’ Day” to commemorate the birthday of the legendary engineer Sir Mokshagundam Visvesvaraya. Sir Visvesvaraya, an eminent Indian 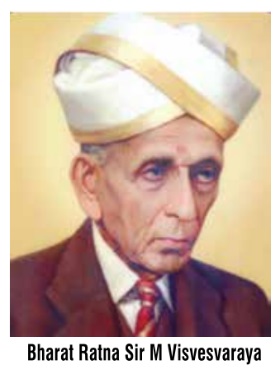 engineer and statesman was born in a remote village of Karnataka, the State that is incidentally now the Hi-tech State of the country. Due to his outstanding contribution to the society, Government of India conferred “Bharat Ratna” on this legend in the year 1955. He was also called the precursor of economic planning in India. His learned discourse on economic planning in India, Planned Economy for India and Reconstructing India, was the first available document on the planning effort of the country and it is still held  as the parent source matter for economic planners. A theme of national importance is chosen every year by the Council of the Institution and deliberated at its various State/Local Centres to educate the engineering fraternity in general and the society in particular. This year the 52nd Engineers’ Day will be celebrated all over the country and the Council of the Institution has selected the theme as “Engineering for Change” to mark the occasion. 52nd

‘Change’ is the most important challenge faced by the engineers of a developing India. They are further being challenged by the changing climate and ever increasing population. Extensive research is being carried out in all engineering disciplines to cope with such emerging challenges. Information and communication technology and Electronics are playing a key role in several initiatives such as Digital India, Make in India, Start-up India and Smart Cities. Keeping in view of the rapid transformation and innovation at international level, engineers of our country should be

prepared to cope-up with the changes. The complexity further increases due to environmental concerns and actions needed for sustainable development. Engineers now cannot restrict themselves to a particular discipline. Good understanding of interdisciplinary innovations, design, planning and undertaking of researches and projects on that is the need of the hour. Renewable energy has become the key notion of all Electrical as well as Environmental engineers as we have to move away from fossil fuel to save the environment. Wind energy and solar PV energy are now finding place amidst the conventional energy supply of the nation and interconnectivity of those with the main grid is being looked into. To facilitate the mobility of the huge population of our country, ‘Green transport’ is required to be implemented for all mass transport system.

Therefore the theme “Engineers for Change” calls upon the engineers to be the harbinger for the change by exploring the disruptive technologies in all engineering sectors to enable India to lead the crusade of mitigation of climate change.

The theme ‘Engineering for Change’ is chosen for Engineer’s Day 2019 celebrations to address all these aspects.